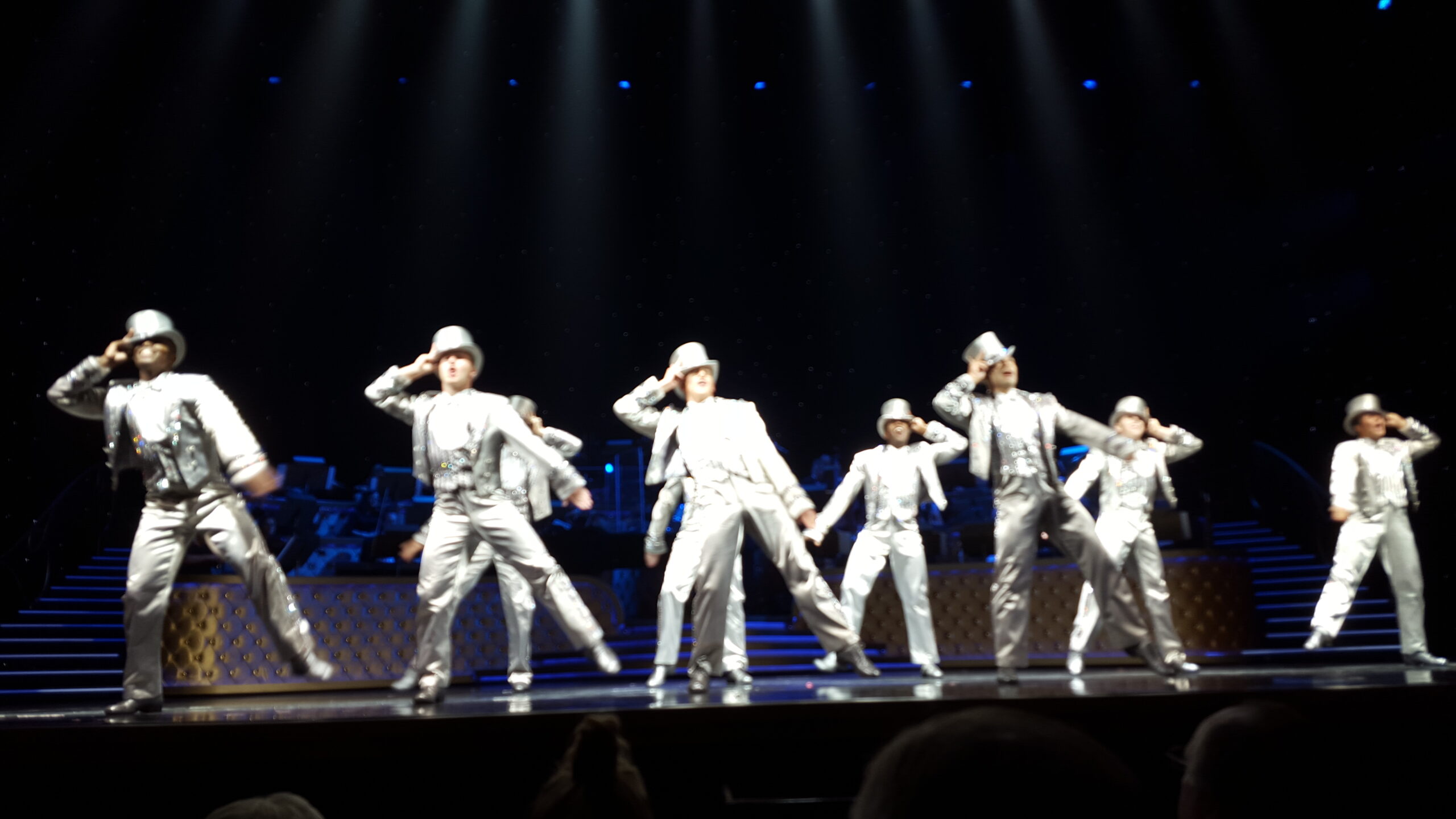 In the world of Broadway musicals, there’s a term to describe a song that stands out above the rest of the selections. A song or a performance that is so over the top that it’s known as a showstopper. Steve Wynn has brought a show to Las Vegas that is simply known as ShowStoppers because every song and every performance is a pinnacle of magical interpretation.

I had the pleasure of seeing this magnificent show on my last trip to Las Vegas and for those of you that read that first blog, you know how much I loved it, but I have to say, this time around, it was even better than I remembered. From the first sweet musical note to the final curtain and exit music, I was enthralled, enchanted and completely entertained. There is no other show that compares to this extravagant production that encompasses the best of the best. Both in musical selection and in the talented performers that do what they do so extraordinarily well.

When I first saw this show, I absolutely raved about the lead female cast members and I have to tell you that I’m in awe of the three gorgeous and talented women that grace the Encore theatre six nights a week. One of the leading ladies left the show recently and I knew that Kerry O’Malley was irreplaceable. I was convinced that no matter how good the new female lead was, she wouldn’t be able to touch the performance of Ms. O’Malley.

Well, I was wrong. Rachel Tyler is a beauty that hails from the United Kingdom and has a resume that includes national tours with Mamma Mia, Grease, Fame and The Rocky Horror Show. Ms. Tyler was every bit as good as her predecessor, while still bringing something new and vibrant to the stage. Her voice is unbelievably strong and her stage presence was so powerful that from her first song, she had touched my heart and brought my emotions right to the surface. By the last song, I had tears running down my face and goose bumps on my arms. She’s believable, she’s natural and above all else, she’s definitely a star.

Joined by the two other female leads, Lindsay Roginski and Nicole Kaplan Fenton, she easily could fill the shoes of any great Broadway performer. The three of them together on one stage, makes this show worthy of the Antoinette Perry Award for Excellence, informally known as the Tony Award. I can’t say enough about these three stand out performers, but I will say that they make me wish I had just a smidgen of their talent.

The biggest difference between this show and the last one I saw was how impressed I was this time by the male leads. Randal Keith, David Burnham and Andrew Ragone were at the top of their game with this particular performance and I was more impressed than ever with their vocal range, powerhouse voices and stellar performances. Randal Keith was born to perform and he easily has one of the best voices out there. David Burnham and Andrew Ragone bring a masculinity to stage that rounds out the sweetness of the ladies.

Every song in this amazing show quickly becomes a favorite with hits from shows like, Cabaret, Chorus Line and Chicago. Not only was I mesmerized by the lead vocalists, but I was also blown away by the cast of fabulous dancers. All of them are extremely talented and lend so much to this production. There were three stand outs for not only their fancy footwork, but by their shining personalities. Natacha Bachour is a gorgeous creature that stood out in every thing she did. Stefan Raulston is the dance captain and with good reason. His smile, his easy moves and his connection with the audience makes him someone to watch. However, the dancer that caught my attention and made me want to know more about who she is and where she comes from is, Genise Ruidiaz. This young lady hails from Miami, Florida and throughout each and every performance, I couldn’t help but be fascinated by her beauty, her acting and her flawless dancing.

Every performance and every song from ShowStoppers is simply the best. I would like to tell you about all my favorite moments, like the jailhouse scene from Chicago that has world class pizzazz with lovely leading lady, Lindsay Roginski. Then another favorite was Nicole Kaplan Fenton singing alongside David Burnham in Money Money or when she plays the adorable Lola in A Little Brains, A Little Talent. This petite, uber talented lady could easily be mistaken for Kristen Chenoweth except she brings her own perfectly suited personality to life when she performs each of her fantastic numbers. I would also like to tell you how magical and powerful the newest cast member, Rachel Tyler was when she sang, Don’t Rain On My Parade from Funny Girl. I thought I had seen a great show, I thought I had witnessed polished talent, I thought the show was as good as a show could be, until Ms. Tyler came out and nailed this classic number from Funny Girl. It doesn’t get better than that. Ms. Streisand should be jealous.

If you have never seen a Broadway musical, or if you have seen them all, you will still want to go see Steve Wynn’s ShowStoppers. It is the epitome of the greatest songs from the all-time best Broadway shows. Even if you don’t think you like Broadway, you will still be pleasantly surprised and leave the theatre feeling something you didn’t expect to feel. There is nothing like live musical theatre and with this show featuring a thirty-four piece orchestra conducted by Maestro Dave Loeb, you will be entertained in a way you’ve never been before.